I encountered this error accidentally, and spent almost a night to find a solution (actually very simple).

This problem can be caused by many reasons, in my case:

Delete the file (if it exists) /etc/modprobe.d/blacklist-nvidia.conf and reboot.

I accidentally sudo apt update and sudo apt upgrade on my ubuntu server. The Nvidia driver version was updated from 440 to 450+, and then later I found the Nvidia CUDA version changed in nvidia-smi, like this: 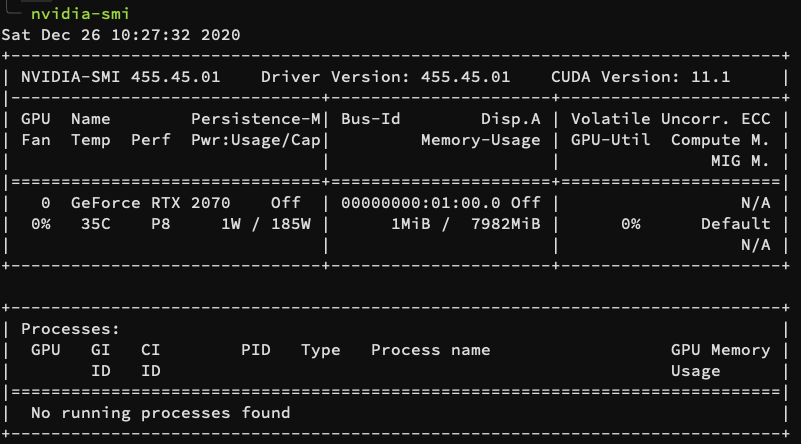 The CUDA version became “11.1”, instead of the 10.1 that I installed on the server. Because one of the packages that my labmate uses depends strictly on the CUDA version (10.1), I realized that I “made a mistake” and decided to roll the update back.

After a series of operations and commands, I purged everything related to the “nvidia”, “libcuda” and “cuda” and was going to install them back from scratch.

However, no matter how I installed the driver or rebooted the server, the command nvidia-smi just didn’t work at all, showing the following error:

Here are the possible solutions that I came across, but didn’t work for me.

Not rebooting after installing drivers

Yes, it does need a reboot to enable the drivers. But this didn’t work for me. Same error after reboot.

Another thought that came into my mind was the unmatched driver version. Maybe the driver is too new for an old device and vice versa. You can find lots of posts claiming this when you search the problem on the web.

Then I tried to install different versions of the driver.

None of them work, and the system may screw up when you got so many versions of the driver installed and uninstalled.

Updated Kernel not matching the old the Nvidia drivers

Many other posts say that, if you update the Linux kernel, the Nvidia driver that was installed during the older kernel period will not compatible with the updated kernel.

The solution is to use use dkms (Dynamic Kernel Module Support) to install a new kernel-compatible files for the drivers, like this:

The driver version can be found by the command whereis nvidia.

However, this solution didn’t work for me either, because even my driver was installed after the kernel update.

Other solutions didn’t work in my case

Finally, I confirm that I made a mistake by running the command sudo prime-select intel. “nvidia” means the GPU I have, while “intel” means the integrated GPU in the CPU.

This will generate a file “blacklist-nvidia.conf” in /etc/modprobe.d/ which prevents the Nvidia driver from loading during system boot.

My monitor connects to the HDMI port of the motherboard. I thought the prime-select command only affect how the GUI was processed, which is not. It also decides which driver that is actually loaded.

It turned out I deleted the Nvidia drivers after I prime-select intel, so I missed the chance to correct it (the command is no longer available).

To get it right, I deleted the blacklist file and run

Then reboot, everything works well, nvidia-smi back to normal.

Btw, I saw the hint in this and this discussion threads.

In other words, there is nothing wrong after I updated the kernel and the nvidia-drivers at the very beginning. I just spent a whole night fixing an illusion or display “error”.