By default, people use SW4STM32 IDE to develop STM32 projects on Linux and Mac OS. However, the code completion for C/C++ in it really sucks. Then I decide to use Spacemacs to code (as usual). This post records the various solutions to add the completion functionality to Spacemacs.

This post is for Mac OS and Linux. I haven’t tested it on Windows, but there should be solutions for Windows as well.

Ignore these questions if you are already familiar with them.

As said above, you don’t need an up-to-date version of them (they are at version 9.0.0 at the time of this post). Version 8.0 is more than enough for STM32 coding.

They are usually bundled and referred together, but it seems that they need to be installed separately.

People said it is OK to download the pre-build binaries and configures the PATH variable. You can try that as well.

bear is useful for general C/C++ development, but I have another walkaround for the STM32 project. You can keep it for future use.

The description of C/C++ layer could be found here (Github).

To enable Clang support set the layer variable c-c++-enable-clang-support to t in the dotfile:

clang support needs a file called .clang_complete to get a list of folder paths that contains the included header files, so that the clang can find them and analyze them.

This is actually the main point of this post. Because everything above could be found easily on the internet.

Generic approach (Not for STM32 projects)

Download a file called cc_args.py in clang_complete. Its usage could be found in a video by Eivind Fonn on YouTube. In brief, cc_args.py consumes the commands generated by the cmake and outputs them after formatted.

This way is generic, for general C/C++ development. However, you know, you don’t use command line to build an STM32 or other embedded system projects. You just click the “Build” button on the IDE and everything is done by the IDE (SW4STM32 in my case).

Since I could not find a good way to apply the cc_args.py to an STM32 project. I gave up this approach.

STM32 depends on the code generator, cubeMX or something else. Therefore, the include paths and compile options are generated automatically. The question is where to find them.

I somehow generated a .clang_complete file for my project successfully. Here is what it looks like:

(Note: your project may be different from mine)

Basically it records all the build options and paths during the make process. Specifically, the below parts:

could be actually used by all other STM32 projects with just slight modification. The question is how to get the header file paths.

My solution is, there are already available, generated by CubeMX. There are three places you can find them.

Get it worked in Spacemacs

If you have finished the following:

You should be able to work with an awesome STM32 coding environment.

Since the develop branch will finally become the master branch, it is better to follow this section.

The description of C/C++ layer for the Spacemacs develop branch can be found here (Github).

I tried rtags without luck, and I switch to lsp-ccls and it works great so far. I documented both of them here.

I used the bear I mentioned in “Prerequisites” above. The usage can be found on its website.

Here is what I had done for the STM32 project:

However, the compile_commands.json file looks nasty and bulky, and it seems not to include the “command” field as the file I found online.

Here is how one of the items looks like:

Imagine you have hundreds of such very similar items, resulting in a file with 130 kB. This solution is just not elegant.

But the most important part is that I ran the rdm server and rc -J compile_commands.json file, The completion options didn’t come up at all. 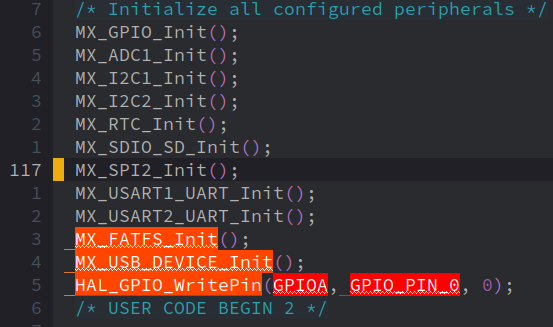 I didn’t want to spend any more time on debugging this and I switched to LSP.

Should anyone know how to get rtags work, please let me know? Thanks.

As you may had read from the C/C++ layers description, there are three LSP backends available for C/C++ mode: lsp-clangd, lsp-ccls, and lsp-cquery (Read more).

I read many articles and finally chose lsp-ccls as my backend.

The official setup could be found here.

Basically, ccls supports both compile_commands.json and other customizable options in the .ccls file.

Since you have read my experience in configuring rtags, you make not want to use that file for ccls as well. (Note: the file should work for regular C/C++ projects, but not for STM32 projects)

Here is the .ccls file for my project:

It looks familiar, doesn’t it? It is just my .clang_complete file with a prepended “clang”.

Here is the final step, configuring your Spacemacs.

Here are the screenshots of how it works. Spacemacs (develop branch) + lsp-ccls + clang-8.

Keyboard shortcuts that I used frequently. (, is equivalent to SPC m)